We took a trip to DNV GL at Høvik, outside Oslo, to find out how this works in practice. Here we met Camilla Kjelsaas (27) and Torkel Skeie (45), whose working day has changed quite a lot in the space of a few busy months.

Stopping a ship takes a lot of resources

The challenge involved in ship surveys used to be that they were time-consuming because a surveyor always had to be present irrespective of what was to be surveyed. However, current technology allows a completely different way of working and a number of assignments can be carried out as remote surveys. This does not replace the need for physical surveys, but it does reduce it and is one of several digital measures that DNV GL is working on in addition to drones, machine-learning and digital twins, to mention just a few.

"Remote surveys involve a surveyor relying heavily on digital tools to carry out verifications, checks and surveys – without actually being physically present on the ship," explains Torkel, who has worked for DNV GL since he graduated in 1998.

"It's a very time-saving way of working for both customers and us. Previously, we sometimes had to drive for 2-3 hours to be on board a ship for half an hour and then drive back home again. In addition, the ship might have to make an unplanned stop in a port in order to submit documentation, and also spend time preparing for our arrival. Stopping a ship can cost tens of thousands of US dollars each day, and some ships have day rates of several hundred thousand dollars," says Torkel.

Camilla, who has been involved in both the old and new ways of working, can see major changes.

"I see how this helps us in connection with travelling, waiting, document-handling – quite simply everything that can be done more efficiently. We cut down the time spent on all this and instead spend time on the things that create value – for both our customers and us," she says.

Camilla joined DNV as a Technical Trainee in 2016, just after graduating from the Norwegian University of Science and Technology (NTNU). For two years, she worked in Norway, Poland and Singapore. During her stays abroad, she experienced how time-consuming a survey process can be.

"In Singapore, I was among other things involved in a survey where we started off by going out on a launch boat, which is a small boat that transports crew, operators or surveyors out to the ship. This boat called into Singapore harbour, where we waited for a while before jumping onto another boat which took us out to the ship we were to survey. The actual survey only took one hour, but the travelling meant we spent the whole day on this job."

From three to 30 assignments a day

Camilla and Torkel tell us about a working day filled by steadily increasing numbers of assignments. We are curious about the process. What happens after they receive an assignment online, and what does a remote survey really entail?

"I'm lucky enough to carry out day-to-day remote survey operations, so I'm involved in deciding what to do about all these inquiries we receive. The process is quite simple: we receive an assignment – whether it's an order that must be complied with or valves that have to be checked – and then we conduct a little review before allocating it to our surveyors, who work from a PC onshore," says Torkel.

"And that might be me, for example," interjects Camilla. "I will then take a closer look at the matter and assess whether I need more documentation or pictures, and decide whether I should set up an appointment to see the ship via a live-stream. Naturally, there are strict documentation requirements and we have good routines in place to make sure the documentation is correct. After conducting the survey, I report on the job. Our database is then updated and the result is made available in our customer portal," she says.

In November, Torkel, Camilla and the rest of the remote-survey gang received 2-3 assignments each day. Now they receive almost 30 inquiries every day. Torkel points out the direct access to technical expertise as an important part of handling all the inquiries efficiently and thoroughly.

"This allows us to gather expertise from around 400 technical experts all over the world. Following an assessment, such an inquiry often culminates in a remote survey. Many of the experts have a lot of experience of being surveyors, so the same experts are used for remote surveys," he says.

Camilla also points to the in-house expertise as a good aid.

In addition to all our maritime experts, there are around 25 of us here at Høvik working on remote surveys. We cooperate very well and closely with each other. It's good to have discussions about areas where I can benefit from my colleagues' expertise and experience, and I'm learning a lot of the time," she says.

Torkel joined DNV GL just after the company started to use emails, and tells us that people must be willing to change in a rapidly shifting digital landscape. "The fact that we have done things one way up to now doesn't mean we have to continue to do it that way. Times change, things become more digital and new opportunities arise," he says. 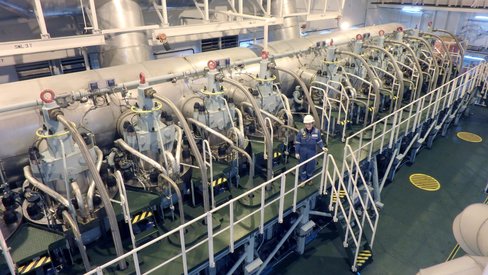 Another picture of Camilla as a Technical Trainee with DNV GL – here in front of the main machinery of an enormous container ship in Poland. (Photo: private)

This open way of thinking was one of the reasons for Camilla applying to join DNV GL in the first place.

"I always knew there was a lot of know-how in DNV GL and, as a new NTNU graduate, being able to utilise all the knowledge that is here and at the same time start to use and further develop what I studied was a completely fantastic learning opportunity. I'd also heard there are many different opportunities within this company, and I regarded this as an advantage," she says.

She explains that although a lot of the "touch, feel and see" part is lost with remote surveys, engineers still have a lot to think about.

"Remote surveys are also a very practical assignment, and for an engineer that is quite good because many of us are practical people. That is also something that motivates me to continue my career in DNV GL – the many, varied opportunities, both in Norway and abroad. I'm also very satisfied with my tasks, which are both challenging and exciting. We often come up against new problems where we have to find good, safe solutions, and this keeps us curious and motivated," she says.

Like Camilla, Torkel also joined DNV GL right after university. He chose DNV GL over other large Norwegian engineering companies, citing the atmosphere and people he met at his interview as the decisive factors.

"I didn't know very much about DNV GL before I started, but I'm delighted with the choice I made," he says.

"Working for DNV GL has given me many opportunities, and I've had many different jobs within the company. The fact that this is a global company means we can work abroad for short or long periods. I've experienced many exciting places in connection with work. That and my colleagues are the reason for me staying with the company."